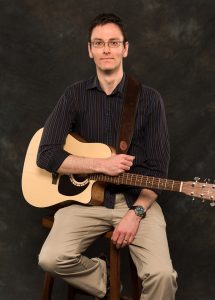 Dave’s first instrument was actually the fiddle, which he played with earlier versions of the band. He started learning guitar when he was 16 and has been the band’s guitar player since 2015.  After the band achieves international notoriety and sells out its 2023 world tour, Dave plans to retire from the hustle and bustle of performing and spend more time cultivating a large Twitter following.  Dave’s turn-ons include long walks on the beach, clever wordplay, and catchy rhythms.  His turn-offs include bad breath, excessive flatulence, and synthesizers.